You Get to Choose 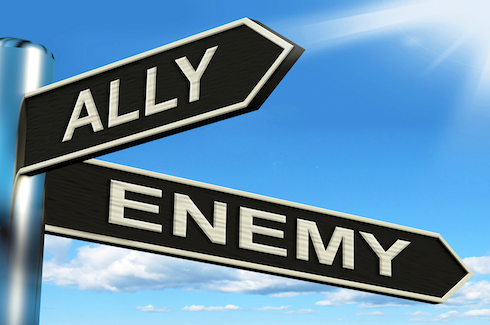 Since last Friday night and Saturday morning, so many of us have been thinking about what we would have done if we lived in Charlottesville. Many of us have also thanked God that we do not. But, we don’t have to live in Charlottesville to think about what we would do in the face of racism, injustice, and terror. Racism is everywhere. It is here too. As I have been thinking about all of this, I have also had the parable of the “Good Samaritan” on my mind as it was the one chosen for this week. With that in mind, I wonder if you will imagine this scenario with me:

It’s sometime a couple weeks ago and you live in Charlottesville, so you have been reading about the “Unite the Right” rally planned for this coming Saturday downtown. It’s going to take place at the statue of Robert E. Lee that the city council voted to take down when they met in April. This usually relaxed college city is buzzing with talk about what will happen. You don’t usually get involved in this type of thing, or politics in general really. As far as this issue goes, you don’t really see what all the fuss is about actually. It’s just a piece of bronze and concrete – it marks a time in history. What’s the big deal? On one side people seem to be saying that taking down the statue is erasing history, while on the other side, they are saying that this statue celebrates slavery. You can see the point of both sides, but you don’t have any real feelings about it either way – you’re sure they’ll work it all out though…

It’s now Friday evening and you are leaving your job at the University Library when you begin to hear chanting from the direction of Nameless Field. As you come around the corner towards your car, you see the Statue of Thomas Jefferson. It has been ciricled by University of Virginia students holding hands… You can’t understand what’s happening because the statue with all the fuss about it is further downtown in Emancipation Park. And besides, all that hullabaloo isn’t scheduled until tomorrow…

Then you hear it… the chanting… you begin to make out the words… “You will not replace us! Jews will not replace us! Our Blood, Our Soil! Our Blood, Our Soil!” You turn to the direction of the voices and see what you can only describe as a mob… it’s like a scene out of a movie you saw once where men in white robes and hoods head out looking for the next person to lynch – except this mob holds tiki torches, wears polo shirts, hold Union Jacks and Nazi flags and do not have their faces covered at all… And these guys seem to have a hatred for Jews this time instead of African Americans – like in that movie – none of this makes any sense! Who are these young people??? And how can there be so many of them!? There are voices yelling from all directions. You hear one shouting – “stay in formation! Two by two” – you can’t believe what you are seeing…. you stand back by your car and just watch in complete shock as they go by. As the mob enters the park, they clash with the students who are black, white, and brown and they are all yelling too, but you can’t hear what anyone is saying now…it is utter mayhem… you are terrified, you get in your car and head straight for home. You check Facebook and Twitter as soon as you get there to read about what just happened… and it still doesn’t make sense to you. But, you do know that your heart aches and you are sick to your stomach! You are now bordering on numb and don’t know what to do. This is the kind of thing you have only seen on TV – how can this be happening in your city? How dare they walk your streets and spew such hateful words!? –But these are real people. You saw their angry faces up close. You took them seriously – this was not TV. They seemed to have nothing to hide and you were frightened of them –even though they looked like they could be your brother, or your son. You are beginning to understand what the fuss about the “Unite the Right” rally planned for tomorrow is all about. This feels dangerous. Will it be more of the same – or worse? What will you do?

As I see it, there are at least three options if you lived in Charlottesville last Friday night and something like what I just read happened right in front of you:

This is what Jesus calls us to do when he challenges us to “Love your neighbor as yourself”. In the parable today, the Samaritan is a victim of racism in his every day life. After all there was no such thing as a “good” Samaritan in the ears of those early listeners! His people were seen as “less than” others. But, Jesus chooses him to teach us what it means to be a neighbor. The victim in the parable is never racially identified… His race doesn’t matter here, what matters is that his position on the road, where he lays dying, is what puts anyone who stops to help him at risk: Risk of attack by bandits, risk of being ritually impure by touching his blood, or risk of any number of unknown scenarios to those who witness him on the road. Unlike the Priest and the Levite, who worried about themselves first, the Samaritan chooses the needs of the other over his own in that moment and takes the risk. He saw that he could help someone who was suffering, so he did.

On Saturday, people started showing up in Emancipation Park in Charlottesville around 8 am even though the rally wasn’t supposed to start until noon. Many of those there for the “Unite the Right” rally showed up armed with weapons and shields – these included militia members toting semi-automatic rifles and pistols. Some of the counter-protesters were present with sticks and shields of their own. The tension was palpable. The police stood guard, but did nothing to prevent what happened next. They watched, never breaking formation as the rally-goers and counter-protestors collided in a violent flurry of attack. The police finally declared it an unlawful protest just before noon and issued a dispersal order. The rally-goers planned to move the gathering to another park and it seems like a full crisis had been averted – nobody died – yet. Before they could assemble a state of emergency was declared and the rally was shut down completely. This enraged many who had travelled great distances to have their voices heard. Within the hour, one of those people would roar his car directly into the area where the counter-protestors were still gathered killing Heather Heyer and injuring 19 others.

Heather Heyer was a 32-year-old white woman from Charlottesville. She was a paralegal in her day job and helped people through the hard choice of bankruptcy. She was a person who fought for others. Her mother said, “it was important for her to speak up for people she thought were not being heard” and that is what put her in downtown Charlottesville on Saturday in counter-protest to those that chanted, “One people, one nation, end immigration,” “Jews will not replace us,” “White lives matter,” “Blood and soil,” and “F-you F—–s.” Heather was there in solidarity with voices that were fighting against the hate in non-violent protest.

At Heather’s funeral, her mother, Susan Bro, in an act of grace and poise that I don’t think many of us could muster, issued a challenge to people like you and I: People that already try to go the extra mile for others – people that are trying their best to be good people already. She challenged us to do even better. This is what she said to all of us who are asking ourselves right now, “but what can I do?”

She said, “You need to find in your heart that small spark of accountability. What is there that I can do to make the world a better place? What injustice do I see, and want to turn away, I don’t really want to get involved in that, I don’t want to speak up, they’ll be annoyed with me. My boss might think less of me. I don’t care. You poke that finger at yourself, like Heather would have done, and you make it happen. You take that extra step. You find a way to make a difference in the world. So, remember in your heart, if you’re not outraged, you’re not paying attention and I want you to pay attention – find what’s wrong, don’t ignore it, don’t look the other way, You make a point to look at it and say to yourself, ‘what can I do to make a difference?’ and that’s how you are going to make my child’s death worthwhile. I’d rather have my child, but, by golly, if I gotta give her up, we’re gonna make it count!”

There is nothing more to say than that, except maybe, “Go, and do likewise.”

Mom, Minister, Yoga Teacher
View all posts by kimcurlett →
This entry was posted in Uncategorized. Bookmark the permalink.